Among many definitions available online for Business Process Modeling, following are few that captured our attention;

With all above being true, it can be summarized as how work gets done in an Enterprise or an organization.

BPM has emerged rapidly throughout the last two to three decades, and has replaced previous organizational efficiency practices such as the Time and Motion Study (TMS) or Total Quality Management (TQM). Such demand for BPM is a result of,

BPM can be considered as a quality management tool due to its I) technical nature, 2) the process emphasis and 3) analytical approaches & responsibilities arising in the improvement of quality, in the market. Business process modeling is highly useful in change management of organizations.

A summarized list of BPM features are as follows;

Following hierarchy is mainly used in process modeling for large enterprises. It categorizes all the processes of an organization in to five levels so that it is easier  to streamline the outcome. 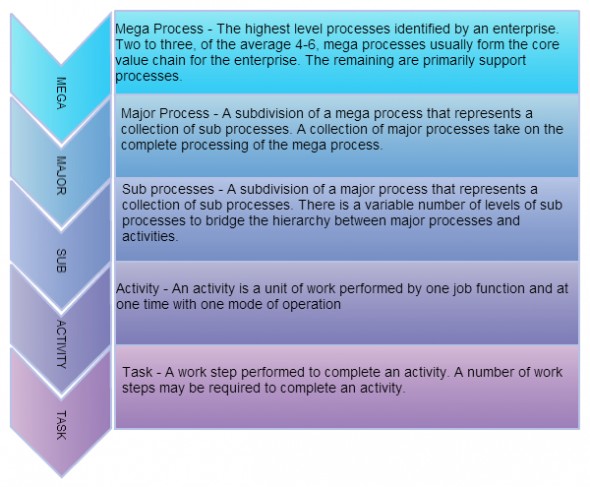 The origins of BPM runs centuries back. So lets take a quick run through a summarized history of it.

In ancient times, production in cottage industry happened by one person making one item from the beginning to the end. When factories became a standard, many employees making one item at a time proved time consuming and inefficient.

In 1776 “Division of Labour”– Adam Smith argued that breaking up the production process and creating peculiar tasks would simply and sped up the process. He showed that if the different stages of the manufacture were completed by different people in a chain of activities, the result would be very much more efficient. Hence business process was born.

Early 1900s “Time and Motion” – Thinking forward, Frederik Winslow Taylor merged his “time study” with “motion study” of Frank & L. Gilbreth, which resulted in new scientific management methods (1911) and the infamous ‘time and motion’ studies. These studies documented and analyzed work processes with the aim of reducing the time taken and the number of actions involved in each process, improving both productivity and workers’ efficiency. This was enthusiastically embraced by employers and viewed with cynicism and animosity by workers.

Early to mid 1900s “the one best way” – Frank Gilbreth developed the first method for documenting process flow. He presented his paper ‘Process charts – First Steps to Finding the One Best Way’ to the American Society for Mechanical Engineers (ASME) in 1921. By 1947, the ASME Standard for Process Charts was universally adopted, using Gilbreth’s original notation.

In 1930s disenchantment with the assembly line – In the first decade of the 20th century, ‘time and motion’ was a familiar concept, in tune with the modern ‘scientific’ age. However, by 1936, disenchantment had set in, reflected in Charlie Chaplin’s film Modern Times. The film satirized mass production and the assembly line, echoing cultural disillusionment with the dreary treadmill of industry during the great depression. It is perhaps no coincidence that theories for optimizing productivity, and those who profit most from them, are more strongly questioned or criticized when the economic cycle moves into recession.

Mid 1970s workflow – Research and development of office automation flourished between 1975 and 1985. Specialist workflow technologies and the term ‘workflow’ were established. While BPM has its historical origins in workflow, there are two key differences:

In 1980s, the quality era – Quality or Total Quality Management (TQM) was the fashionable management and business process theory, championed by Deming and Juran. Used initially in engineering and manufacturing, it is based on the Japanese philosophy of Kaizen or continuous improvement. The aim was to achieve incremental improvements to processes of cost, quality, service and speed.

Key aspects of Total Quality Management have now become mainstream and successfully adapted to suit the businesses of the 2000s. Six Sigma and Lean manufacturing are the best-known of these methodologies.

In the early 1990s, Business Process Re-engineering made its appearance and started to gain momentum in the business community. While TQM (at this point facing a decline in popularity) aimed to improve business processes incrementally, BPR demanded radical change to business processes and performance.

In 1993, Michael Hammer and James Champy developed the concept in their book ‘Re-engineering the Corporation: A Manifesto for Business Revolution’. They stated that the process was revolutionary, fast-track and drastic rather than evolutionary and incremental. It was a huge success and organizations and consultants embraced it with fervor. The re-engineering industry grew and triumphed before it began to wane.

Critics of this completely ‘new broom’ methodology would say that it is impossible to start from a clean slate in an already established organization. Other criticisms were that it was dehumanizing and mechanistic, focusing on actions rather than people (Taylorism).

Crucially, it is associated with the terms ‘delayering’, ‘restructuring’ and ‘downsizing’ of organizations, all lumped together as euphemisms for layoffs. Not what Hammer and Champy had envisaged.

The best principles of Business Process Re-engineering still survive in BPM, on a less drastic, less brutal and more manageable scale. With the lessons been learnt, Business Process Modelling can and does work, but it must be treated with caution. The key is in the implementation. When it is conducted and implemented sensitively and inclusively, it can be good for both the company and its staff.

For a workforce drowning in administration, much of it repeated or re-entered into multiple databases, BPM can be a great thing. It can free up time to focus on the ‘value added’ tasks that are empowering and rewarding: talking and listening to customers, making decisions or doing what they are good at rather than dealing with dull and meaningless duties.

BPM is effective like any other methodology can be. In the wrong hands it can suffocate and obstruct an organization and its people. The tool does not produce the results – what matters is, how you use it.

In Implementing Business Process Modeling, there are many techniques that have been tried and tested throughout the years. Some may have few drawbacks and some proven successful.

A detailed view of the above BPM techniques will be covered in our next article. Creately supports most of the techniques mentioned in above list.

Your Thoughts on this Business Process Modeling Tutorial

Your feedback is what keeps us going and it help us to cater our content to better serve your needs. If you have any questions about this article leave a comment and we’ll get back to you as soon as possible.

And stay tuned for our next article where we’ll cover various BPM techniques in detail.