Creately was always about intuitive diagramming that was fast and smart. We’ve always made it a point to keep upgrading our systems to ensure that you face no delay at all when it comes to creating those all-important diagrams. So as tweeted by Nick yesterday, you should notice an increase is speed when it comes to certain functions.

Some of the improvements also includes a faster response time when it comes to functions such as Create, Save, Open, Rename, Copy, and Delete diagrams, amongst many others. Other improvements include a quick response to opening the document manager and selecting as much as five diagrams at once! It’s a no brainer as to how this could translate to real-world benefits.

We reckon our performance upgrade would save you a whole lotta time, thanks to time being reduced when it comes to the usual diagramming functions such as opening documents, creating diagrams, saving and publishing them.  But there’s more reason to cheer, our performance upgrade has inherently improved the response time for Central Desktop as well. Read on to see how.

As most users may already know, Central Desktop offers a complete Software-as-a-Service (SaaS) collaboration platform, which allows business teams to communicate and collaborate online. This collaborative workspace gets more powerful now with Creately’s integration into Central Desktop’s platform that offers customers the ability to translate their ideas graphically.

The new online diagramming feature makes it extremely easy for users to create a visual diagram and embed that into online documents, wikis and discussions with just a few clicks. The good news is that this process has got quicker compared to what it was.

A real testament as to how versatile and easy-to-use Creately is would be the vast amount of diagrams drawn by our users. Currently we have in excess of 100,000 diagrams that encompass everything from Block Diagrams to UML Diagrams. This page has been a constant source of inspiration for new diagrammers and there are many diagrams that could be graded as Novice at one end to Professional at the other end. Despite having thousands of diagrams, the time taken to load a page is now quicker than what it was. You can click a diagram to view it on the Creately Diagram Viewer, which is also fairly fast now.

There are more improvements along the way (very soon!) in the form of bug fixes. We appreciate all the bug reports you guys have sent us and we’re hard at work to make sure Creately is that much smarter to work on. We’re all for constant improvement; if there are certain things you want improved, you’re more than welcome to pop us a tweet or send us an email.  It’s true what they say, sometimes it’s those small details that can make a world of difference.

Creately Collaboration for All 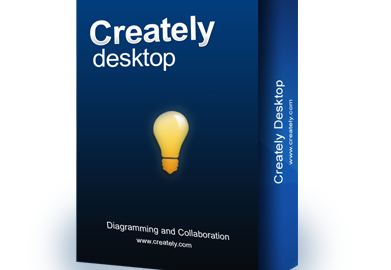 At just $75, you get Creately Desktop and more!